Why Per VLAN STP?
If you have a large network with lots of switches and VLAN’s you can use Per VLAN STP to plan for a more efficient network

Even although there are many versions of STP they all use a very similar set of rules.

STP is a feature used to prevent loops when you are using redundant switches and without STP a loop could form and cause a number of problems on the network.

During a unicast broadcast message (which happen all the time) the switch will forward the frame out of every port except the one it came in on. Therefore if SW1 sends a frame out and SW2 and SW3 receive it then SW2 and SW3 will forward out all ports except the one it came in on.  SW2 sends to SW3 and SW1. SW3 send to SW2 and SW1 and you can see how the loop is now beginning to form. This is known as a broadcast storm, this can kill a switches CPU and Memory usage very quickly. 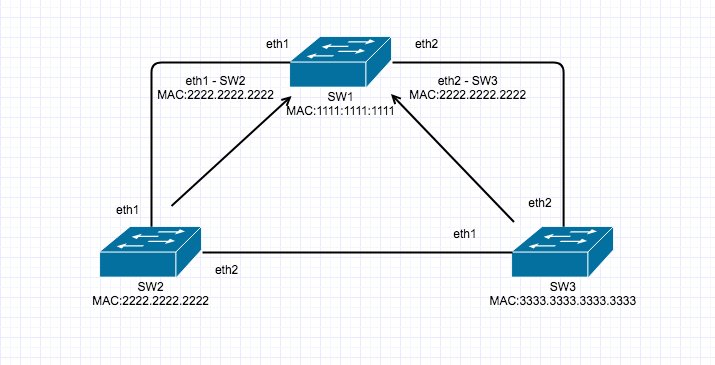 Another issues is explained below

HOST1  sends data to HOST2, however since SW2 doesn’t know how to get to SW2 it sends frames out all ports, thus sending to SW1 and SW3 so HOST2 receives frames from HOST1 via SW3 and then again via SW1>SW3. This is known as Duplicate Frames.

So how do we fix the issues mentioned above? Thats right Spanning Tree Protocol by blocking one of the redundant paths. 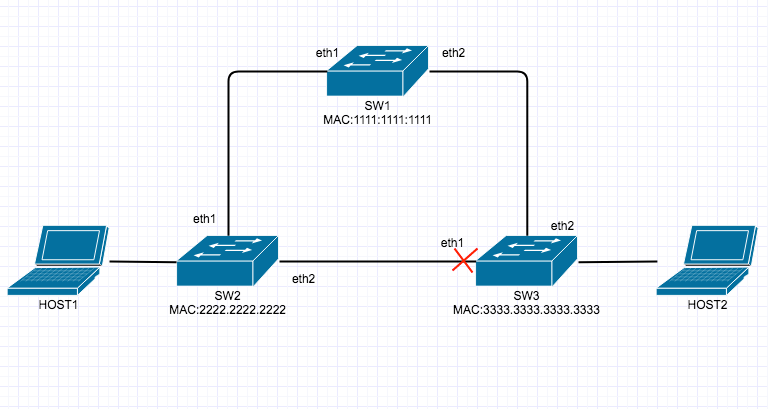 The question now becomes how do the switches decide on that Port to block? STP follow’s strict rules, when deciding what ports to block. 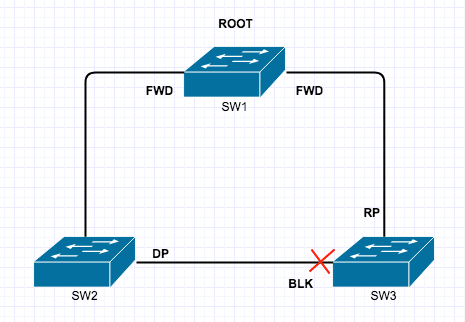 On per VLAN STP You could have this on VLAN 10 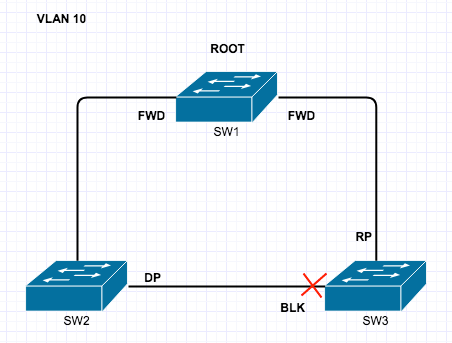 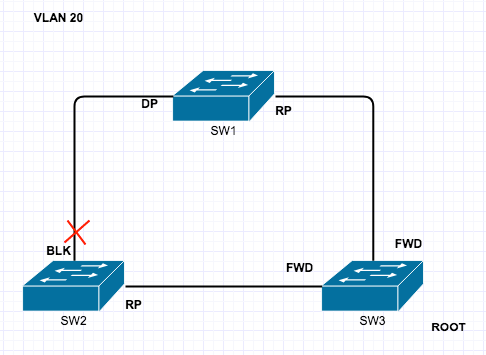 I will now cover the port roles and the port states so you know what each is:

When ports change from one Role to another it will go through the Port States. Note also that the Listening and Learning states are transitional and it wont stay on either.

Each switch has and sends messages to each other called Bridge Protocol Data Units (BPDU’s) These BPDU’s contain specific information pertaining to each switch, such as Root Cost, Bridge ID (BID) for Itself and for the Root.  A BID is made up of STP Priority and MAC address, the default value of The BID on SW1 would be 327691111:1111:1111 since 32769 is the default STP priority and the MAC address. The switch with the lowest BID will become the Root Bridge. This is what is looks like before the Root Bridge Election and the exchange of the BPDU’s 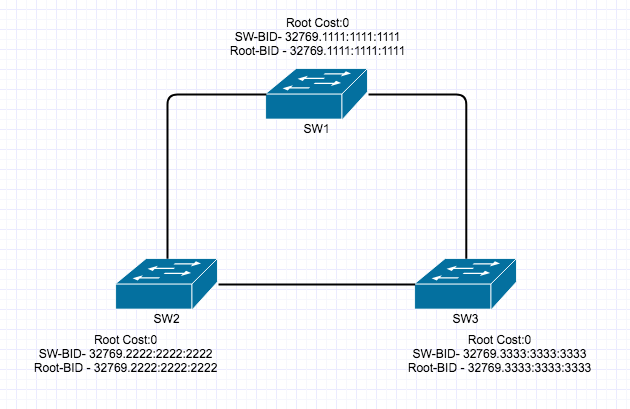 This is what it looks like after, when the lowest BID wins. 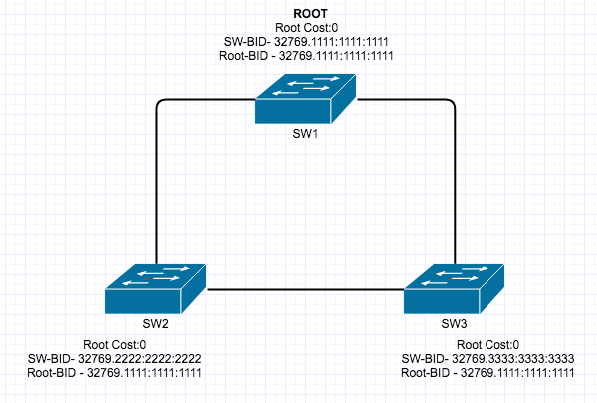 The ports on each switch now transition into their respective states following the STP Rules as mentioned above.

The ports can change based on the Cost of each link. The port costs are listed below, however in this example we will just be using Gig Ports, but for clarity a FastEthernet Port will be slower than a GigEthernetPort, the faster the port the lower the cost. The Root Port (RP) is the lowest port cost. 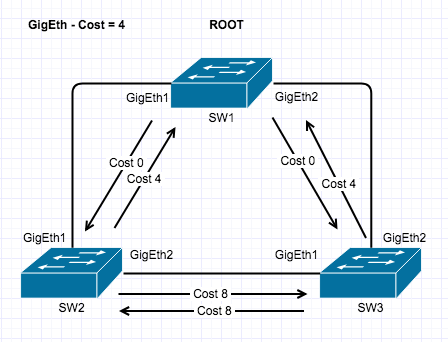 Of course there can be ties between multiple connections and STP can be tuned.

Designated Ports are selected by Root Cost the by Lowest BID and then by lowest numbered Interface. Therefor in the diagram above the Designated port would be GigEth1 on SW3 since it is a lower numbered interface than SW2 GigEth2.

All ports that are not Root Ports or Designated Ports are Blocking Ports.

From the time a link goes down to convergence it takes a total of 52 Seconds. When STP was designed that was fine but now, this is much too slow which is where Rapid Spanning Tree Comes in.

I hope this have given you a good explanation of STP.